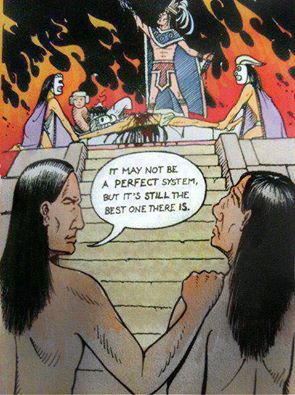 A few years ago it became popular to encourage people to formulate a bucket list, a series of peak experiences they must have before they die. The concept pretended to encourage us to think outside the box, to eschew the everyday and mundane in favor of grabbing all the gusto we can out of life. It’s a travel writer’s dream, a resort owner’s fantasy.

A decade ago I went to Machu Picchu because the person I was traveling with wanted to. The whole way there I felt like a piece of meat with a wallet being herded towards a tourist destination. I never got the feeling I was on any kind of adventure at all, unless it was an adventure is being fleeced.

I’m happy to report that the site looked just like it does in pictures, perhaps with the addition of a thousand Chinese tourists who have recently become enamored and capable of leisure travel. The Chinese are the new Ugly Americans. They’re everywhere, dressed in clashing polyester fabrics and photographing everything in sight.

The fact is, we have no idea when we’re going to die, and so the idea that you can list items and then check them off when you accomplish whatever goal you set for yourself regarding them, is patently absurd. Likewise, a superficial visit to a place that has earned bucketlistability will not change you in any meaningful way, much less prove transformative, if that’s what you had in mind.

Far better to find the profound hidden in the mundane. Look around you and see what you’ve been ignoring or taking for granted. Stop trying to be a smart shopper in the adventure marketplace. You can’t consume an exciting life. When ordered, wonder and amazement do not appear on cue.

Much of what we do in this vast marketplace we call the modern world is to consume things we assume have value, and hopefully at prices that will prove us smart shoppers. Amazon Prime encourages us to see ourselves as members of a shopping elite, who can buy impulsively and receive the rewards of this action almost immediately.

My mother grew up on a farm in South Dakota and even when we lived in St. Louis, she still ordered our clothes out of the Montgomery Ward catalogue, delighted by how much time she saved by not shopping. The packages simply arrived on the front porch, much as Amazon packages do today, only back then they weren’t carried by drone, but by the mailman.

Consumption rarely leads to insight, or ecstasy. It’s all buildup and no payoff. It’s all anticipation and no delivery. Anyone who has ever directed a kiss in theater or film knows that the anticipation of the actually lip to lip contact is much more important and the mash itself.

Likewise the journey to enlightenment probably beats the pants off nirvana itself. Cartoonist Robert Crumb has Mr. Natural explain this to us at depth.

Dig what’s in front of you and you’re already in the right place at the right time. Long after other people’s travel photos and you’ve bought a one-way ticket to Palookaville. Facebook and other photo sharing sites and in the business to creating envy among those who wish they were anywhere but where they are.

There’s absolutely nothing “wrong” with Southeastern Iowa. True, it isn’t Western Montana or Southern Mongolia, but it’s doing a bang-up job of being what it is, which is completely sufficient for your happiness right now.

If you really want to change your location, you can do so nowadays far more easily than at any time in history. You will, however, have to face your fears and let go of the idea that security even exists, much less is preferable to what you’re about to undertake. Notions like security, or health, or it’s recently formulated cousin “wellness” are abstract illusions. Often they’re used to sell something indirectly, the way “diversity” is used to sell “affirmative action” which more directly would be called “racial profiling.”