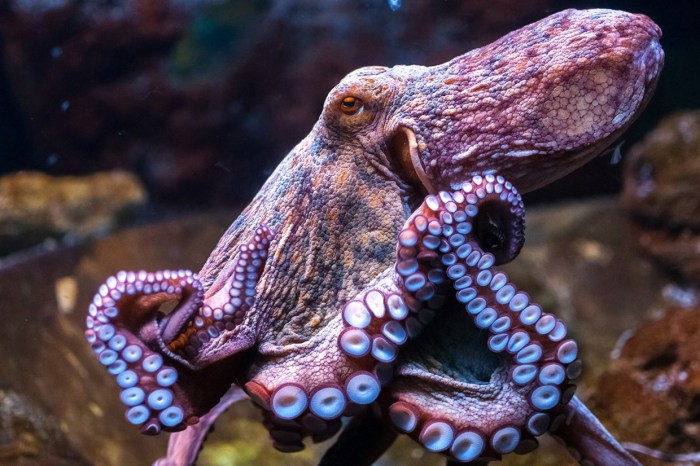 He decided to call it Squidland. It was to be an aquatic park featuring octopuses, but they could think of no name with the multi-syllabic octopus that tripped off the tongue. The logical choice would be to copy the title of the Beatles song, but the possessive of Octopus was the problem.

Fish are not sexy. Aquariums cannot compete with zoos. Squidland was especially poorly situated, on an outer ring road of Auburn Park, a small city that had failed to meet earlier growth projections. The city fathers had pressured the local banks to fund a business park which had never attracted any businesses. A Dollar Store was the only tenant.

Squidland was behind the business park, a long, thin ten-acre parcel that ran along a creek. The only people who worked there full-time were a groundskeeper and a couple of interns from the Auburn Park community college.

The owner had developed a fascination with octopuses when he was a graduate student in biology. He claimed to have had a one-month conversation with an octopus and insisted they are smarter than us. He also believed that they came from another planet, where they had evolved over a period of millions of years. Freeze dried octopus eggs had floated our way, part of the millions of tons of cosmic dust that rains down on our planet annually.

At present Squidland has no octopuses, just squids. Fifty or so, floating in an almost clean Plexiglas tank. Some of them were dyed different colors in an attempt to make the exhibit more colorful.

Squidland’s founder, J.J. Palmer, suffers from dementia. Most of the time he seems lucid, but when you listen closely to what he’s saying, you realize that he’s faking it. He doesn’t have a clue what he’s trying to say. The words come out all right, but they don’t add up to anything. Fortunately, he still remembers how to simulate the rhythms of normal conversation, so he doesn’t talk too long. He ends his statements by downwardly inflecting his voice, implying that he’s gotten his idea across. Except there was no idea to begin with.

He visits the site every day, often sitting in the main foyer and chuckling softly to himself. The only other sound is the bubbling of the aerator in the squid tank. One of the younger interns tried playing music on a Bluetooth speaker, but J.J. asked her to turn it off. It interrupted his train of thought. She squirmed and finally quit. The noise in her own head was driving her crazy.

Eventually, the time came when Mr. Palmer was no longer able to care for himself. They put him in a home with a lot of other demented old people, and he forgot about Squidland. Once the bills stopped being paid, the employees and interns stopped showing up. The power was eventually turned off, which meant the air bubbler stopped working. And that’s when something strange occurred.

The squid climbed out of the tank and wriggled and flopped their way across the floor. They slid under the front door and out onto the parking lot and into the grass. Fortunately, it was raining.

They stopped when they made it to the base of a tree, and there they combined with worms, snakes, frogs, various fungi, and assorted insects, to produce a large hybrid creature, which quickly evolved in size and intelligence.

Since Squidland was no longer being maintained, it became a refuge for the homeless. A dozen men retired there every evening, and some of them became embraced by the new life form and altered. While generally retaining their former outward appearance, they became subjects of the larger life form, and were released to apply for positions in city government. Several joined the city council, and after a year or so, one became mayor.

It was the mayor himself who purchased an octopus and brought it to live in the tank at Squidland, now renamed the “Auburn Park Aquatic Center.” Soon, neighboring communities purchased their own octopuses, and within a few years, there were dozens of these creatures who appeared to be simply inhabitants of museums and aquatic centers, but who were actually running the whole show.

Once the octopuses gained political power, things went more smoothly than they had in years. Within a decade, the state was running a sizable budget surplus, there were aquatic parks in every community, as well as fifty-meter swimming pools, and almost every child was on a swim team. J.J. Palmer never learned of his success, but that didn’t matter, because he died a happy, if demented, man.